Processing Genomics workflows require a variety of tools with distinct computing resources requirements. Some of these requirements are merely beyond the configuration of powerful workstations. High-performance clusters (HPC) offer the possibility to scale up computing resources to meet the increasing demands of these processes. However, maintaining the infrastructure of an on-premises HPC may not be a viable solution for many parities. A more cost-effective method is to provide computer resources dynamically by leveraging cloud computing. This strategy, combined with a powerful workflow manager such as NextFlow, allow researchers to execute their workflows locally and/or in the cloud with minimal friction.

One of the available options to build a cloud-based HPC solution is AWS Batch from Amazon. It is a free service that can run batch jobs either periodically or on-demand in a usage-based pricing model.

AWS Batch can be broken down into the following components:

NextFlow supports submitting tasks (Job Definition) to AWS Batch via API calls. AWS Batch, in turns, maps each task with its resources requirements and store them as Jobs in the Job Queue awaiting for computing resources to become available.

Each Job Queue can be linked to one or more Compute Environnement that, with priority scheduling, distribute tasks of higher priorities to be executed on more than one Compute Environments. 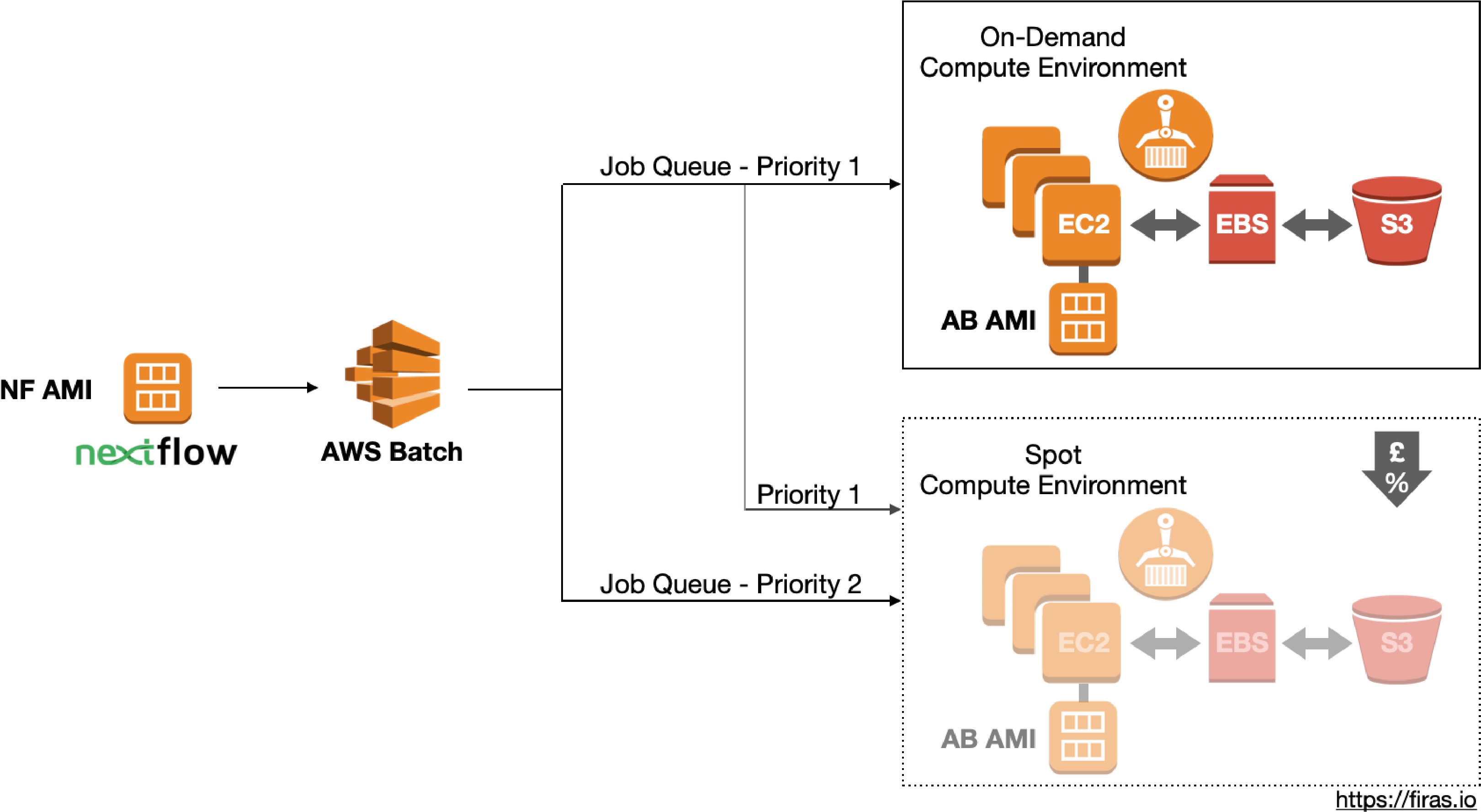 The EC2 mounts the S3 buckets to read the data, perform the process, and store the results back on S3. Depending on the volume of the data, the transfer between the S3 storage and the EBS may add additional processing time. This can be avoided by using Amazon FSx for Lustre which mounts the file system directly on the EC2 instance.

Before running NextFlow on AWS Batch, we need to enable the service in our AWS account.

This user account is used to manage the AWS Batch service. It needs the following privileges to be added within the IAM section:

In addition to the account above, the AWS Batch service needs to be configured with the following roles:

This AMI serves as a template for every launched EC2 instance by AWS Batch. While it is possible to use many different instant types (see here), it is recommended to limit our choices to the ones that are compatible with ECS. The exact processor number and memory capacity are not significant at this stage as they are overridden by the Compute Environment at run-time. However, the attached EBS storage needs to be large enough to handle: the docker image, any genomic indices, input files, temp files and output files for any given process.

Once the AMI has started, we need to install awscli to enable read/write access to S3 storage. In addition, we need to increase the size of the Docker storage to match the size of the docker images to be used in the pipeline (see here). Finally, we need to create an image of this AMI to serve as a template for the ec2 instances launched by AWS Batch.

Although Nextflow supports scheduling jobs on the AWS Batch while running locally, it is not ideal for large workflows as it requires a constant connection for the duration of the workflow which could be hours to days. One possibility is to create a NextFlow job submission EC2 instance with a persistent EBS. This instance can be configured with NextFlow along with other productivity tools such as aws-cli, git, tmux, neovim, etc.

The final step of this setup is to configure NextFlow to work with AWS Batch. For this, we need to create a profile where the executor is awsbatch. In addition, we need to configure the options for queue, aws regions, access credentials, and the container to be used in each of the submitted processes.